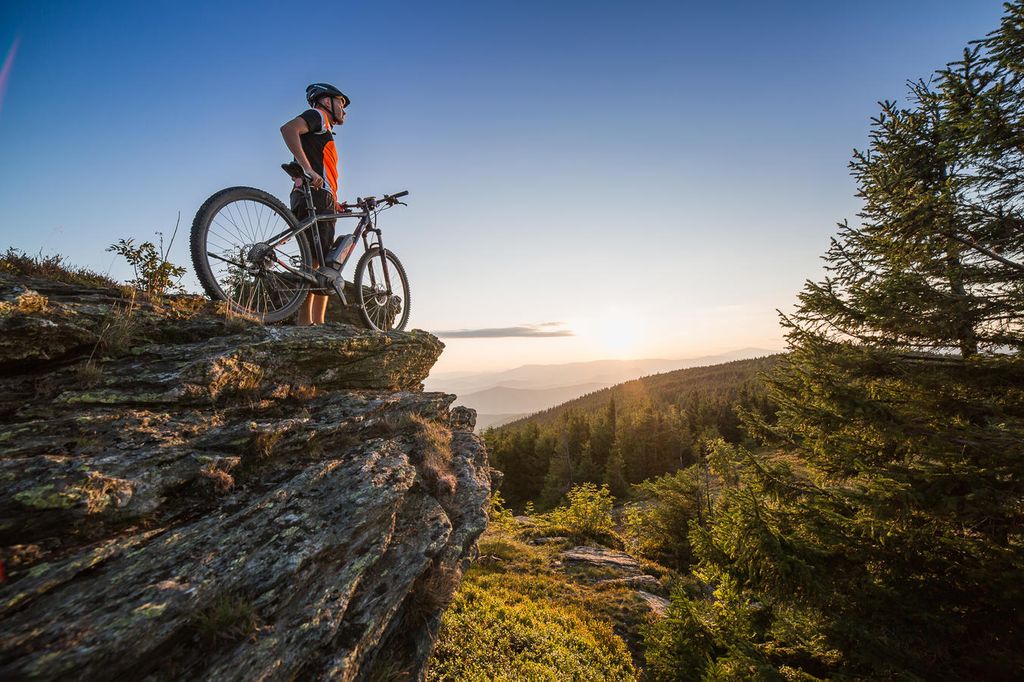 Rožňava is the largest city of the Slovak Karst National Park. It is located in the Gemer region, the Rožňava Basin. From the southern side, the city is encircled by the Slovak Karst, from the north by the Volovské Vrchy foothills. The Rožňavský Potok creek Drázus and the Slaná river run through the city.
The first written mention of Rožňava dates back to 1291. It is found in the Donation Deed to Archbishop of Ostrihom, Ladomir, by the King Ondrej III. The city was named Rožňava by the name of an extraordinary yielding mine: Rosnoubana (Rozsnyóbánya, Rosenau). According to tradition, the first city privileges were granted by the King Ludwig the Great in 1382. In the Middle Ages, gold and silver were mainly being mined here, later Rožňava became an important centre of craftsmanship and education. Visitors may get acquainted with the rich history of mining and metallurgy in the region in the Mining Museum that presents its expositions in several buildings.
The centre of this largest and most significant city of Northern Gemer consists of large square with unique buildings that have been preserved here for centuries. The dominant of the square is the City Tower, which is 38-metre high tower with a wooden shingle roof and was created due to Turkish threat since 1643.
There are many other monuments in the city, which are not just worth mentioning. In case you would want to fill in your free time and draw interesting information from history, we recommend places such as: the watchtower, historical town hall, city hall, František Andrássy Memorial, St. Francis Xavier Church, Cathedral Church of the Assumption of the Virgin Mary, Church and Monastery of the Franciscans - Church of St. Ann, Evangelical Church, Church of the Reformed Church, Sisters of Charity of Saint Vincent De Paul Monastery, Mining Office or Rákoczi Mint, Bishop's Residence, Roman Catholic Parish Office, Old Hospital.
The square can be reached by three access roads and three walking alleys. There are many cultural, sporting and social events organized annually in Rožňava. There is a tourist information centre in the building of the historic Town Hall on the square, where you can arrange your visit to attractions not just in the city, but also throughout the region. You can take a tour of the historic city centre or view it from above, from the sightseeing tower.

Skalisko (1,293 m above sea level) is the second highest peak of the Volovské Vrchy mountains. It is located in the western part of the mountain range in the districts of Gelnica and Rožňava between the city of Rožňava and the village of Betliar. In the old maps, the hill was called Baracká or Baračka. During World War II, the Skalisko mount belonged to Hungary and was its highest peak.
The whole ridge of Skalisko is located in the area of the dwarf mountain pine. The whole area of the hill and its surroundings is rich in forest, meadow, and rocky plant and animal communities. Surrounding forests and large meadows are full of forest fruits, mushrooms, and various healing and protected plants. The view from Skalisko is one of the most beautiful and most valuable ones in Slovakia. The 10-metre high reef at the top provides a circular view of the mountainous part of eastern Slovakia.
Near Skalisko, about 15 minutes after the green sign towards the village of Čučma, there is a Pod Volovcom tourist cottage. The cottage offers board and lodging for tourists.

The Volovské Vrchy hills are a mountain landscape situated in the eastern part of Slovakia with a total area of 1,330 km2. Their highest peak, the Zlatý Stôl golden table, protrudes 1,322.4 metres high above sea level. From the north, they are defined by the Slovenský Raj National Park, the Hornád Basin, from the east by the Košice Basin, from the south by the Slovak Karst, and from the west by the Muránska Planina plateau. The bulk of mountains are afforested. Spruces and firs dominate, beech and oak growths hang on the southern edge of the mountain range.
There are protected areas to be found here: The National Nature Preserve (NNP) Červené Skaly red rocks, the NNP Galmuská Tíšina quiet place, the NNP Kloptáň, the Nature Preserve (NP) Polianske Rašelinisko peat bog, Protected Bird Area of Volovské Vrchy mountains, NP Farská Skala parish rock, and NP Závadské Skalky rocks. The Volovské Vrchy hills are divided into seven sub-ranges: Havranie Vrchy hills, Knola, the Zlatý Stôl golden table, the Hnilické Vrchy mountains, Pipitka, Kojšovská Hoľa grassy ridge, and Holička.
The Kamenný Potok creek flows through the Kamenná Dolina stone valley, which due to the difference in height forms a 12-metre waterfall called the Šikľavá Skala rock. At the northern foot of the Vysoký Vrch high hill (824 m above sea level), there is a significant cave called Šarkanova Diera hole.
The Volovské Vrchy mountains also have something to offer in the field of tourism all year round. The recreation area of Palcmanská Maša is worth mentioning, which is located in the north-western part, the Štós Spa, the Bukovecká Priehrada dam, or the Ružín water reservoir, lying on the north-eastern outskirts. Winter sports may be engaged in the Jahodná and Plejsy centres. 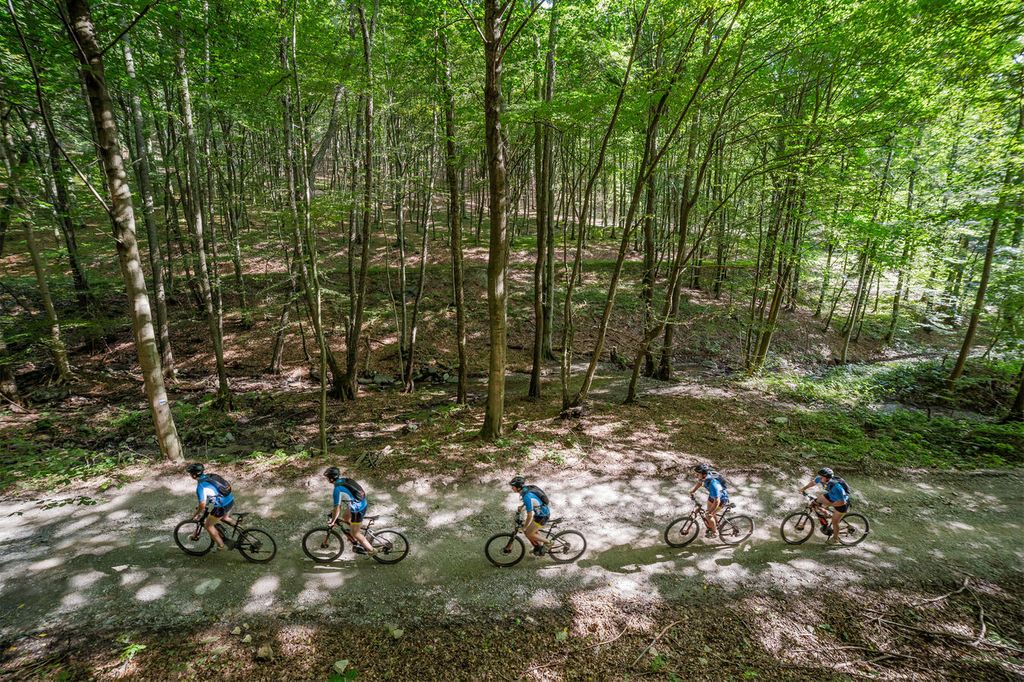 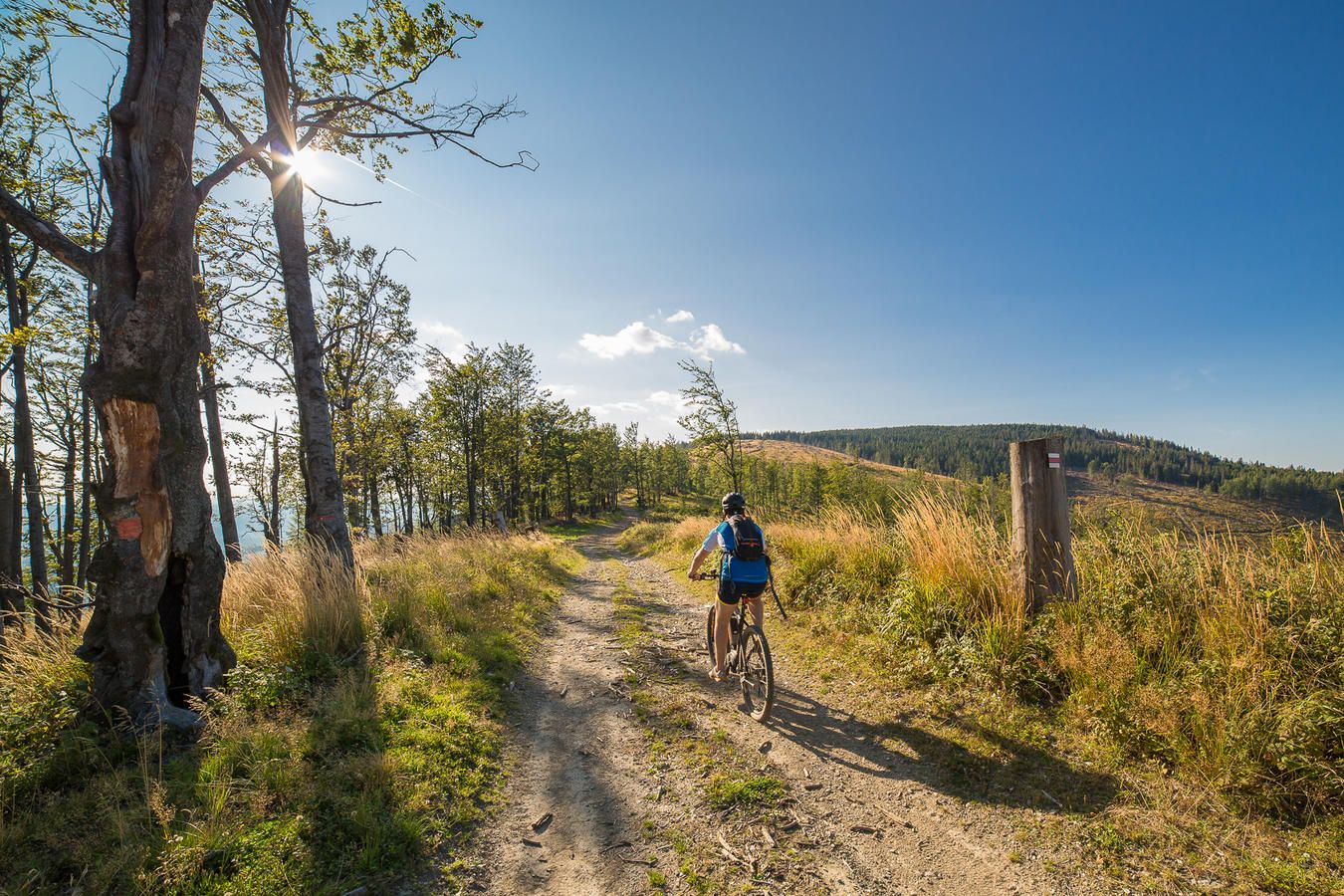 The beginning of the trail is at the dominant place of Rožňava, by the Watchtower in the city centre. Ride along its right-hand side and keep straight on. You will exit the centre through the intersection and continue straight alongside the river.

Out of the city, you will ride around the ponds. There is a turning behind them into the city forests. Turn right. The concrete road extends through a long, steady uphill ride into the mountains. Keep riding along a blue tourist sign.

You will pass a large part of your uphill ride on the concrete road. Turn right at the bar. You will pass through the creek. Next, continue along the sloping track along the blue sign. Just below the ridge, there were a lot of fallen fell trees when we were mapping the trail, making it harder for us to keep on a blue tourist sign. Fortunately, a lot of roads lead to the ridge and it is not a problem to find your own way after a lot of the last height meter on a number of sloping tracks that lead there.

On the ridge, follow the red tourist sign towards Skalisko. There are still a few rising and descending paths. We were mapping the trail after a strong wind, so the road was still complicated by fallen trees. Otherwise, the trip is interesting and changes its character every minute. You will enjoy it. Try to keep riding along the red sign whenever possible.

Vrch Skalisko mount is a reward for a nearly continuous 20 km long ride up. From there, there is no need to rush anywhere. Further on, the trip continues only at a speed limited by your capabilities. But back to the road! From Skalisko, there leads a beautiful trail, which connects to the yellow tourist sign (after a couple of kilometres). The trail starts right below the summit direction Rožňava.

The trail will lead to a sloping track, which is also on a yellow tourist sign. Here it will be consistently rolling down along the yellow sign, along a wide path in a well-recognizable terrain. The only thing to be careful about are gaming animals that you would not want to see crossing your way. After a long way down, you would eventually come to the old recreational centre, from where the concrete road leads, the one you were riding at the beginning. Beware of the ramps that block the whole width of the road.

Shaken out and wind-swept you will arrive in Rožňava, and as you might have thought after the first half that the riding up would probably never end, after the Skalisko run down you would probably say, it had paid off! :) 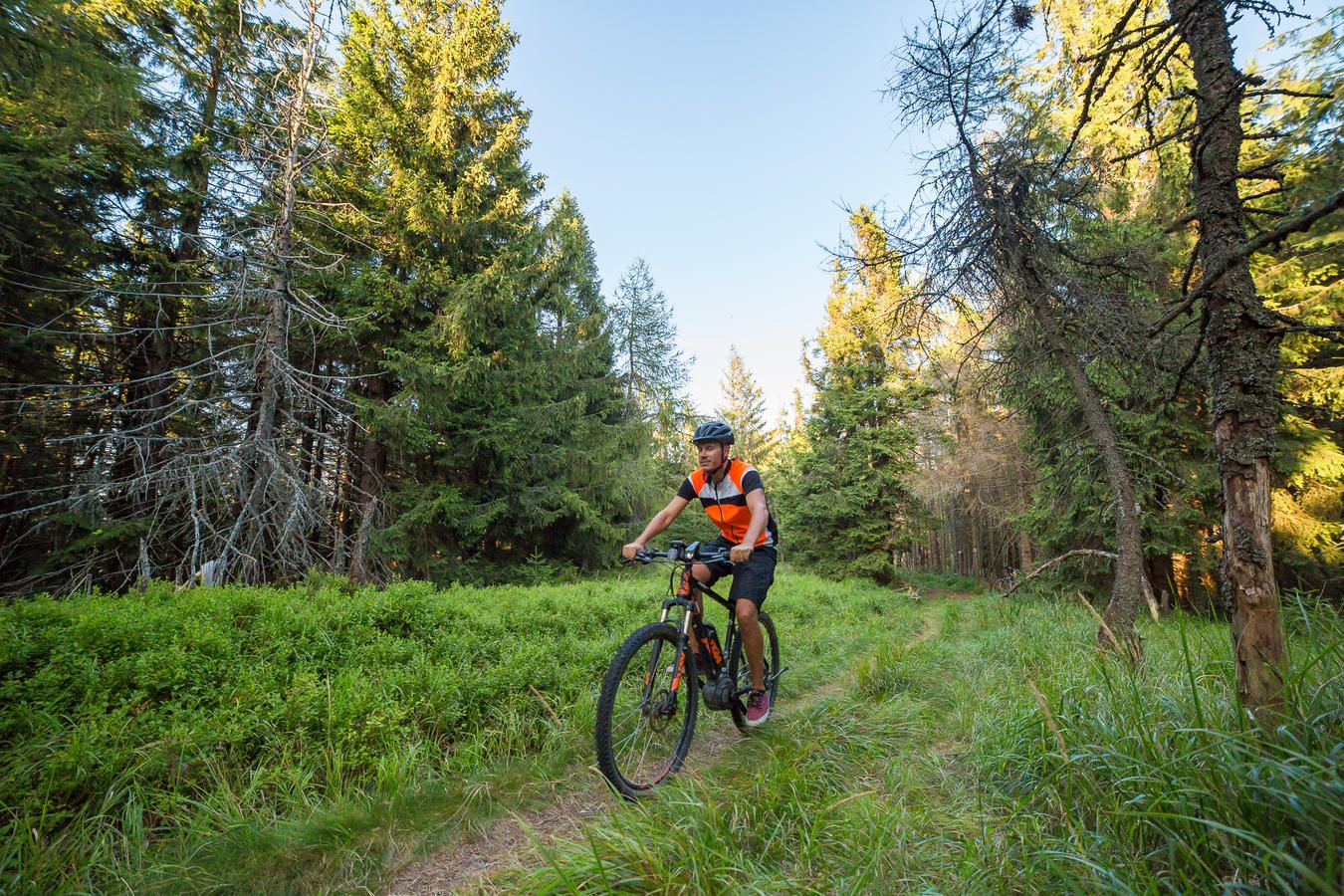