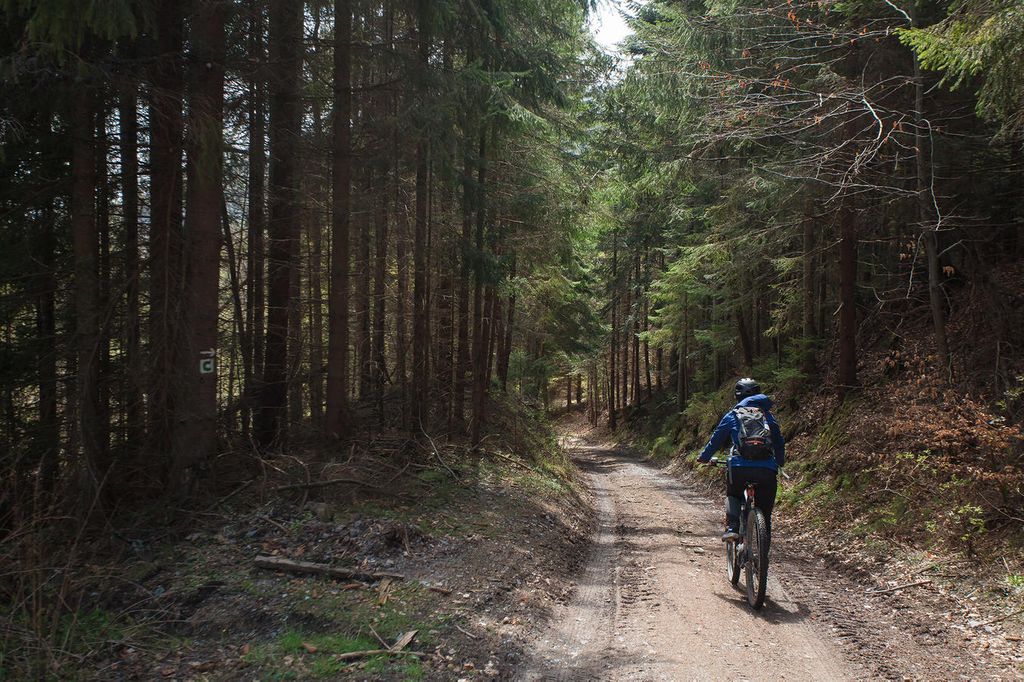 Spišská Nová Ves is a district city in the Košice region. The city is a gateway to the National Park Slovenský Raj. The number of inhabitants ranks the city the second largest one in the Spiš region.
The city lies on the river Hornád in the Hornád Basin, on the eastern edge of the Slovenský Raj, at the meeting point with the Volovské Vrchy mountain ridge and the Levočské Vrchy hills.
When in the city, you may visit and see a number of historically valuable objects. Most of them are located on the Town Hall Square, which is one of the most beautiful and longest ones in Europe. The city was declared the Urban Historical Zone in the year 1992.
At this point, you certainly won't miss the Roman Catholic Parish Church of the Assumption of the Virgin Mary, who is among the most exceptional sights of the city. It would be a pity not to enjoy the view of the city from its spire, which is also the highest spire in Slovakia. Nearby, you may find Miesto Prianí (a wishing place) that serves as a reminder of the first wish of the Gothic bell casting workshop in the Spiš area.
You should take notice of the Town Hall, the Provincial House, Ridotto, the Slovak Church, the Greek Catholic Church of the Transfiguration of Virgin Mary, the Evangelical Church, the Roman Catholic Church of the Mercy of God, the Immaculata, the Institute of Education, the Statues of the Four Evangelists, the Monument of Liberation, the Jewish Cemetery and also the Slovak Double Cross, which is located in the southern part of the city of Spišská Nová Ves called Pieskovec (Sandstone) under the Hill Rittenberg.
Tip:
The World Heritage in the Spiš region is represented by a unique set of cultural and natural monuments. The Spiš Castle, the Church of the Holy Spirit in Žehra, Spišská Kapitula and Spišské Podhradie have been its part since 1993. Nestled in the travertine countryside with preserved territories of Dreveník and Sivá Brada, they created an unforgettable scenery.

The Slovenský Raj National Park is located in the eastern part of Slovakia, declared a preserved landscape area in the year 1964, and re-categorized as the national park by the Government of the Slovak Republic Decree in the year 1988. It covers the area of 19,763 hectares and its preserved zone extends on 13,011 hectares.
The longest river canyon and the largest ice cave in Slovakia may be found here, 25 beautiful waterfalls in 8 rocky narrow passes, more than 300 km of signposted hiking routes and 400 km of cycle routes, 12 nature educational trails (almost 87 km), environs for rock climbing and ice climbing, hipo tourism, winter and water sports and other activities. Slovenský Raj is a paradise for lovers of nature, tourism and sport. It is accessible all year round.
This unique territory, exceptionally abundant in the natural values and beauties with a complex of coniferous and broad-leaved forests, is located on a plateau churned up by continuous erosion. The typical phenomena of the countryside include upland plateaus, deep canyons, gorges, waterfalls, surface and underground Karst phenomena and attractive underground spaces with stalactites and stalagmites. The highest point in the National Park is the Predná Hoľa clear-cut hill (1,545 metres). The most famous gorges include Suchá Belá, Piecky, Sokol, and Kyseľ with numerous waterfalls. Remnants of the originally flat relief include the upland plateaus of Glac, Geravy, Pelc, and Skala.
Geologically, white limestone, even dolomites of the Mesozoic Era, may be found prevailing here in some places. There are almost 200 caves and abysses, out of which just the Dobšinská Ľadová Jaskyňa ice cave is made accessible. The 11 km long breakthrough valley of the river Hornád is an interesting geo-morphological phenomenon.
The vast majority of the territory is grown by forests with the prevailing limestone beech wood, but also pine growths. Preserved plants grow here, such as Alpine Astra, Spring Gentian, Hart’s Tongue, Iris Aphylla, Heuffel’s Saffron, European Globe Flower, Carpathian endemics such as Carpathian Pearl White, Arctic Violet, Slovak Pasque Flower, glacial relics, such as the,Siberian Saxifrage, Dryas Octopetala, Saxifraga Paniculata Mill., and some others. Plentitude and variegation of the fauna represented by animals such as Bear, Lynx, Eagle, Eurasian Eagle-Owl, Black Stork, contains Alpine Chamois re-seated in the year 1963 from the Jeseníky mountain ridge of Alpine provenance, causing damage to valuable plant communities.
The starting point for a trip to the Slovenský Raj are Spišská Nová Ves and Čingov and Podlesok centres in the North side and Dedinky and on the South side.

Podlesok is a significant tourist centre in the western part of the Slovenský Raj in the Valley of the Veľká Biela Voda (high white water) at the beginning of a breakout of the Hornád River and at the mouth of the Suchá Belá gorge. It is the starting point for hiking routes in the north-western part of the Slovenský Raj. It is the local part of the village of Hrabušice. In Podlesok, there are also accommodation facilities, volleyball and tennis courts, and a ski lift.
Čingov is an area in the Slovenský Raj and is situated on its northern edge, at the basin-like extension of the river Hornád, in the vicinity of Spišská Nová Ves and Smižany. In addition to Podlesok on the northern side and Dedinky on the southern side of the Slovenský Raj, the area of Čingov is the largest tourist centre lying above the left bank of the river Hornád and in the lower part of the river Hornád breakthrough.
It is also the starting point for many hiking routes, such as the Tomášovský Výhľad view, Sokolia Dolina (Falcon Valley), Klauzy, Kláštorisko, Hornád Breakthrough, the tourist route, which belongs among the biggest tourist scams of the Slovenský Raj and under Čingov there passes through a specially marked 15 km long educational path.
The Čingov centre provides food and accommodation services (private cottages, company cottages, bed and breakfast business). The Slovenský Raj Mountain Rescue Service House is located there, a field station of the Slovenský Raj National Park Administration (only in the summer months). 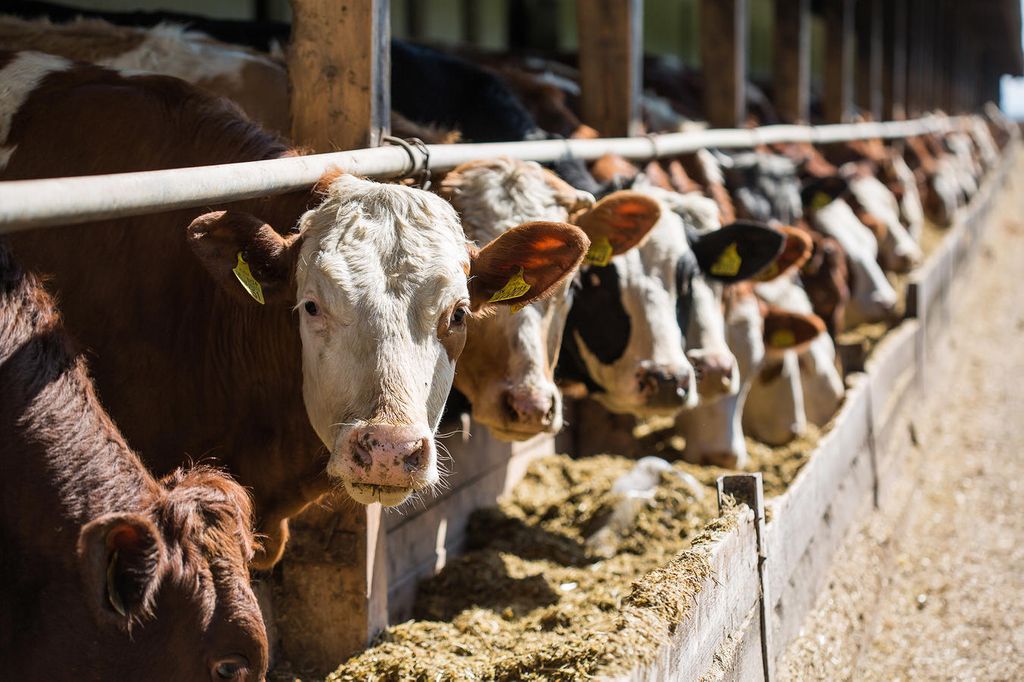 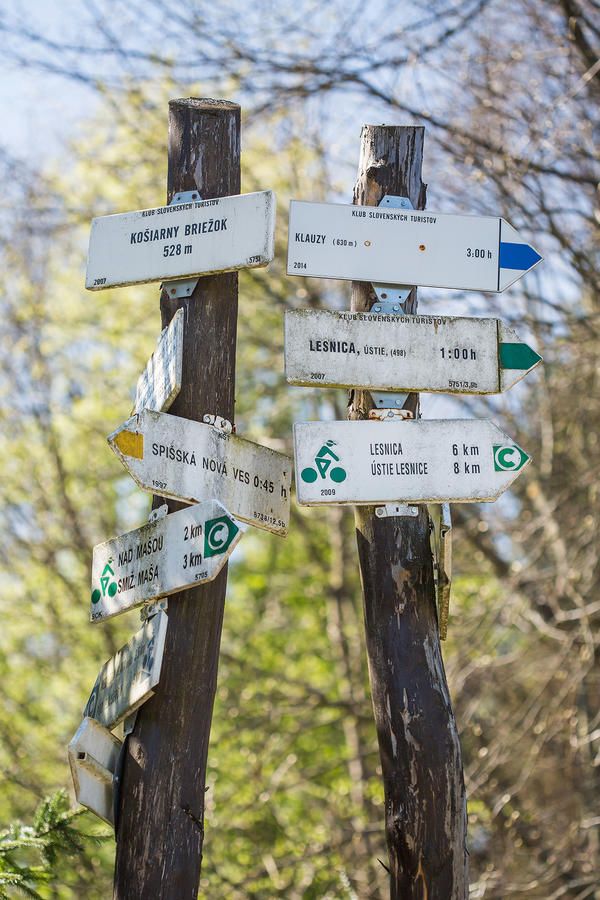 Park your car in the parking lot in front of the winter stadium in Spišská Nová Ves, or in the surrounding area. From there, follow the RED CYCLO SIGNS along the river Hornád, out of the city, in the direction of the Slovenský Raj (Slovak Paradise).

Before the Roma settlement, go across the bridge to the opposite side and continue along the Hornád river.

Red signs will lead you to a large billboard on the edge of Smižany. From there, the route continues to the Košiarny Briežok along the GREEN CYCLO SIGNS.

Follow the green trail – you will first go by the cooperative farm, and then at two Y-shaped intersections keep left. You will come to a buffet at Košiarny Briežok. The pointers are at a distance from the buffet, at the forest line.

Behind the Košiarny Briežok hill, there is the first pretty uncomfortable climb through the forest. You will rise to almost 400 metres of altitude. Before the end of the climb, turn left onto a not paved forest road from the concrete road. After a long climb, you'll enjoy the first smaller downhill ride to the road fork Pod Flajšerom.

After 1 km, continue straight at the crossroads in the valley of the mountains. Just after the crossroads, turn right, where a climb begins. You will rise by still other 200 metres of altitude to the Čertova Hlava (Devil's Head). From this point, the route will steeply climb and change; the remaining kilometres will reward you for your efforts.

From the Čertova Hlava follow the GREEN SIGNS downwards to the Hajdúkova Lúka meadow and connect to the BLUE SIGNS direction MLYNKY along the concrete road.

In the village of Mlynky, follow the RED SIGNS. Continue along the GREEN SIGNS towards MLYNKY direction Palcmanská Maša through the village of Prostredný Hámor. The water site is an ideal place to recover strength in the second half of the circuit.

Continue from Palcmanská Maša under the railway bridge along the main road. After a while, turn right following the BLUE SIGNS through the village of Dobšinská Maša. Across the field, behind the village, you will turn once again to the main road. Here is a quick downhill ride along the GREEN SIGNS to Stratená.

Behind Stratená, enter the gate to the Slovenský Raj and the BLUE SIGNS will take you to Podlesok. First you will experience a smooth hike in a beautiful setting and then amusement of the long downhill ride through the woods. This is a beautiful 20 km long section of the route.

Continue along the GREEN SIGNS to Hrabušice, where at the junction with the main road you will join the RED SIGNS that will lead you up to Spišská Nová Ves.

The RED SIGNS will guide you through the village of Spišské Tomášovce, bypassing Čingov, to the junction before Smižany, where you will recognize the surroundings. The river Hornád will lead you back to the winter stadium. 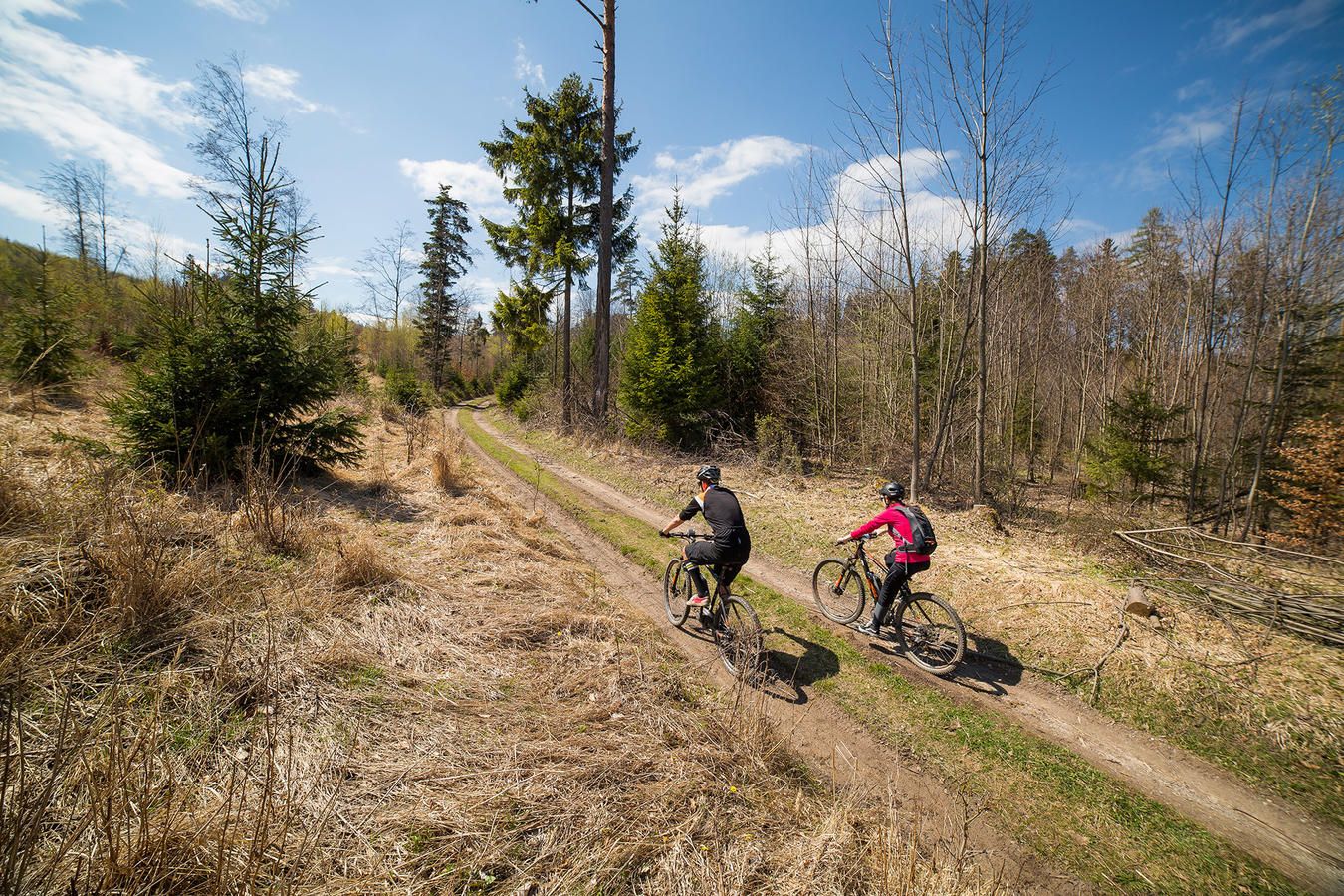