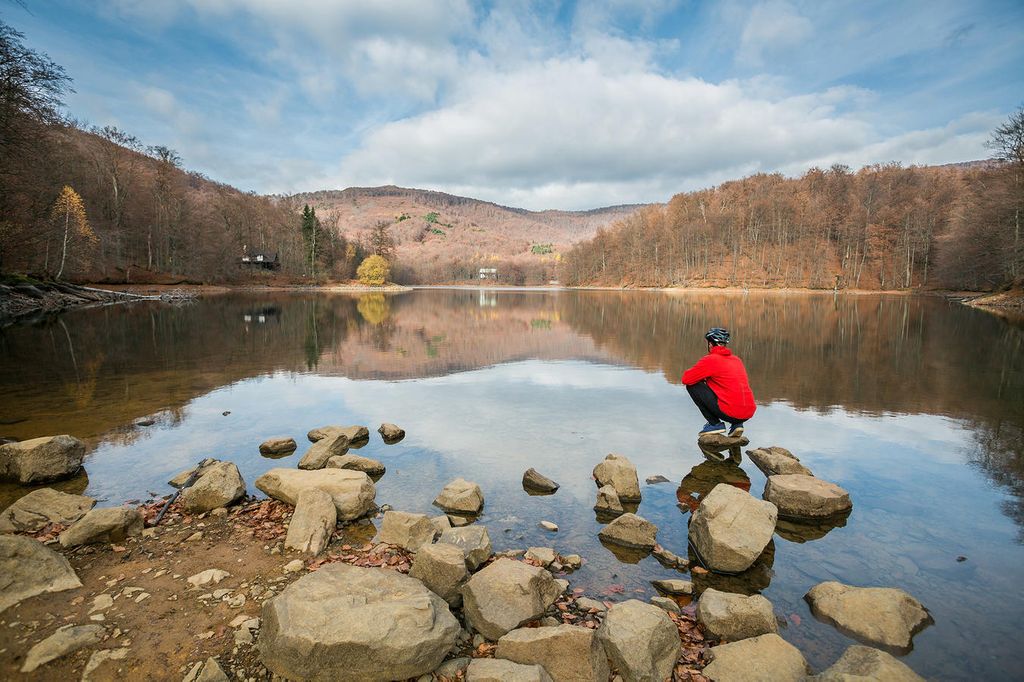 The Vihorlatské Vrchy mountains (Vihorlat) is a mountain range of volcanic origin, a landscape section of the Vihorlat-Gutín area, which stretches in Eastern Slovakia, and partly in Western Ukraine (Zakarpattia Oblast).
To the North, the mountain range is bounded by the Bukovské predhorie foothills and the Beskydské Vrchy mountains, and to the South and Southwest by the Východoslovenská Pahorkatina hilly region. On an area of 669.76 km2, the preserved landscape area East Carpathian Breech Forests is set up containing the growth of ash, maple, elm, and lime trees. Vihorlat belongs among the most wooded mountain ranges in Slovakia, there are intact, deciduous beech forests here, dominated by the primeval forest. In addition to the flora, a rare genus of carnivores - wolf, lynx, otter, wildcat and the rarity of occurrence of butterflies may be found here that exclusively occur in this area.
On its territory, there is the protected landscape area of Vihorlat and also the territory of the Vihorlat primeval forest, also abbreviated as Vihorlat, which was entered in the UNESCO List of the World Natural Heritage sites in the category of Carpathian Beech Forests and Ancient Beech Forests of Germany. The reason was the preserved beech forests with over 240-year-old specimens.
Vihorlat is the highest mountain, protruding 1,076 metres high a.s.l.. Tourists most frequently seek the natural creations of the Morské Oko lake, the Malé Morské Oko small lake, the Sninský kameň stone hill formations, Krivec where also most of the marked tourist hiking trails and educational walkways lead to. The marked hiking trails have their points of departure in the villages of Remetské Hámre, Strihovce, Zemplínske Hámre, Porúbka, Vinné, Belá nad Cirochou and from the holiday resorts of the Zemplínska Šírava lake. You may try out water sports at the Vinianske Jazero lake. The forests of the Vihorlat mountain range are ideal for collecting berries, mushrooms, or medicinal herbs. Lovers of fishing and hunting are also sure to enjoy the locales.

The Sninský Kameň stone formation (1,006 metres a.s.l.) is a mountain in the volcanic mountain range of the Vihorlatské vrchy mountains.
The Sninský Kameň mountain is the most dominant site of the Snina environs. It stands off high above the Morské Oko lake South-East of the village of Zemplínske Hámre. Even though it has the attribute of "Sninský" (of Snina), its peak is located in the district of Humenné, in the territory of the military district of Valaškovce in the cadastral area of Valaškovce - North. It is the lowest of the five mountains around one thousand metres high of the Vihorlat area.
Sninský Kameň is a popular tourist attraction. The top plateaus of both parts of the Sninský Kameň are accessible to tourists by climbing up the iron ladders.
On the Veľký Sninský Kameň hill, there stands a simple metal cross constructed by the Roman Catholic believers and the Parochial Office of Snina in the year 1990, having replaced the original wooden cross. The cross was consecrated by the Bishop Alojz Tkáč. The original cross on the Sninský Kameň hill was destroyed by hooligans years ago, in the 1950s. Several years after the incident, some Poles wished to restore the tradition and built there a plain timber oak cross.
Sninský kameň is part of the preserved landscape area of the Vihorlatské Vrchy mountains and its peak parts, including two striking rock formations, are preserved due to their high scientific, cultural, and social significance as natural monument. The hill belongs to the territory of the Vihorlat Primeval Forest, abbreviated as Vihorlat.
From the top plateaus of both parts of the Sninský Kameň stone hill formation, one may enjoy wonderful panoramic views of the city of Snina and its surrounding area, on the main ridge in good weather and the lateral ridges of the Vihorlatské Vrchy mountain range, the Slovak Poloniny – Bukovské Vrchy mountains with the highest peak Kremenec, the Polish Poloniny- Bieščady with the highest peak Tarnica, the Slanské Vrchy mountains with the highest peak Šimonka, and the extensive Eastern Slovak Lowlands. Looking at the Bukovské Vrchy mountain range, one may notice part of the Starina water reservoir.
From the Eastern plateau of the so-called Malý Sninský Kameň, a view is offered of the Morské Oko lake, the border ridge of Popriečne, and the Ukrainian Poloniny with the mountains of Ljutanská Holica, Polonina Runa (and the mountain ridge of Polonina Boržava with the highest point named Stoj.
Under good weather conditions, one may see the High Tatras and the Low Tatras – and the dominant mountain of the Low Tatras – Kráľova Hoľa.
Sninský Kameň is a frequent tourist destination and is the crossroads of hiking trails leading here from the village of Zemplínske Hámre, from Snina, and from the mountain ridge. Through the Pod Tromi Tablami saddle, there is a connection to the Morské Oko lake and to the village of Remetské Hámre, in the easterly direction of Nežabec and the village of Podhoroď. The educational trail leads here from the Morské Oko lake.

The Morské Oko lake, previously called Veľké Vihorlatské Jazero (the Large Vihorlat Lake), is the largest lake in the mountains of Vihorlat and is the third largest natural lake in Slovakia, after the Štrbské Pleso lake and the Veľké Hincovo Pleso lake in the High Tatras. It is one of the most beautiful still life sites in Slovakia, which has preserved its romance and natural charm.
The formation of the Morské Oko lake falls within the period of volcanic activity in the Vihorlat mountains. A massive landslide from the eastern slope of the Motrogon and the Jedlinky dammed up the valley stream of Okna, and a natural lake was formed behind the barrier. The Morské Oko lake is exceptional by its origin, location, physical, chemical, and biological regimes. It lies beneath the Sninský Kameň mountain formation in the cadastral area of Remetské Hámre, at an elevation of 618 metres a.s.l. The present form of the lake has existed since the 1880s, when an artificial dam wall was built. About 7-hectare karge area, after an increase in water level by 5 metres, it has created today's area of 13.8 hectares. The maximum length of the Morské Oko lake is 750 metres and its width is 312 metres. The lake is 25.1 metres deep. It is located in the preserved landscape area of Vihorlat.
Not far from the Morské Oko lake in the westerly direction, at an altitude of 727 metres a.s.l., there extends the second best preserved lake in the mountains of Vihorlat, the Malé Morské Oko small lake, called Malé Vihorlatské Jazero in the past.
The Morské Oko lake is a great natural peculiarity of Slovak nature. To protect the natural values and the beauty of the lake, it was, along with the nearby forests, declared the State Natural Preserve in the year 1984; today it is the National Nature Preserve covering a total area of 108.48 hectares, with the highest, 5th degree of protection. Fishing, swimming, and boating here are prohibited here.
Cottage Morské oko: there is a buffet with seasonal operation. The cottage offers accommodation, its total capacity is 32 beds.
Telephone booking and information are only available on work days from 7:00 to 15:00 hrs. The prices differ according to the period of the year or occupancy availability. 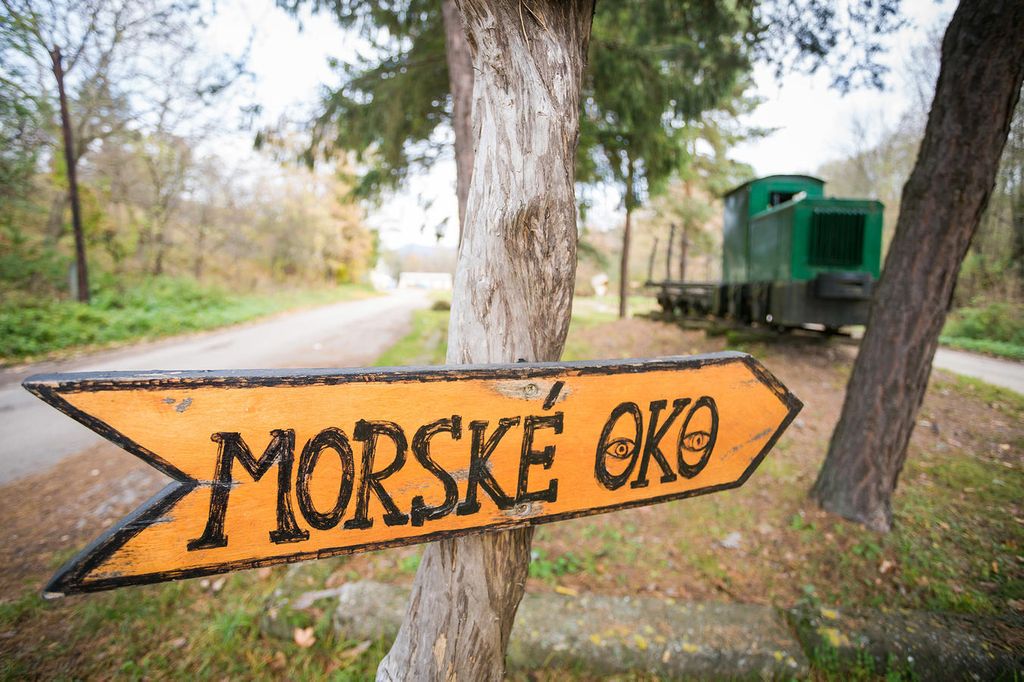 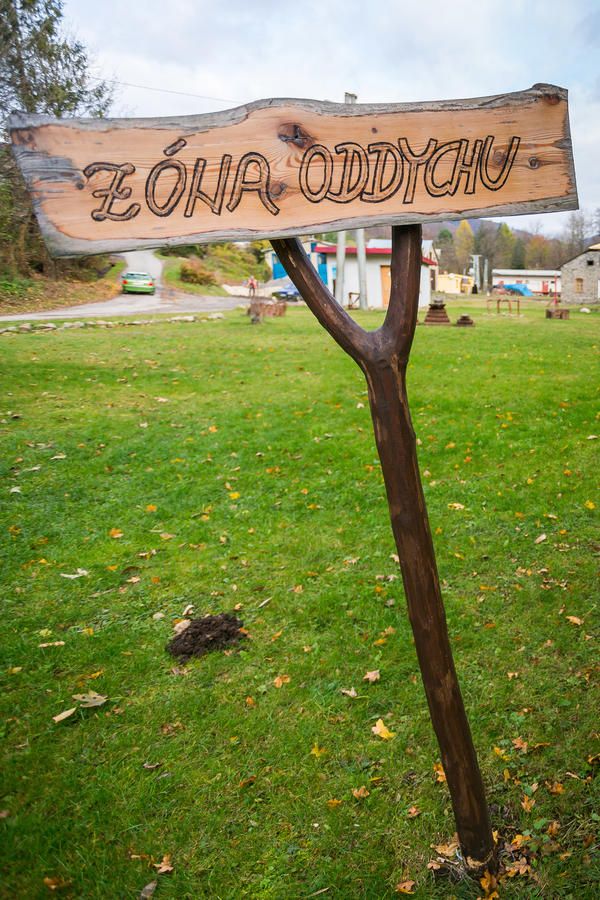 Keep to the right of the blue tourist signs. The route continues in a mild rise.

Turn right at the T junction at the Potašňa pointer. After 1 km, at the Y junction, keep on the left!

You will get to a meadow by the tourist pointer. Continue straight along a wooden house in which one may find shelter in worse weather, hide from wind and rain.

At the Bejla kopec hill pointer, you will cross the green tourist sign. A long downhill trail is ahead of you. Go straight along the blue C signs.

Morské Oko is a beautiful forest lake of vulcanic origin. Stay on the concrete path along the blue tourist trail.

As you go around the lake, the sign posts will direct you down to the buffet (the Morské Oko cottage), which is certainly worth a brief stopover.

Go back from the buffet and continue along the blue tourist trail. This short stretch of road can be demanding for even a savvy cyclist. That short section, however, is not too long and you will soon yield on the road. From here, you can start a long continuous descent down to the starting point, or continue on the tourist trail to the Sninský Kameň hillside.

If you decide to go further along the blue trail, you will reach a clearing with educational boards. From here, it's good to go on foot to the Sninský Kameň hill for 30 minutes and leave your bikes locked there or push them meanwhile.

The red signs will lead you up to one of the hills. You may climb it up easily by using the ladder. You will enjoy a magnificent view of the whole of the Vihorlatské Vrchy mountains and the Morské Oko lake from the top.

From the Sninský Kameň hill, return to the intersection of the blue tourist trail and the blue cyclo-tourist route. Kilometres downhill will pass quick.

On the way down, cross a few tourist pointers. Watch, however, the well-marked blue C signs which will lead you up to the village, your starting point. On the way down, go around the water spring Richard, an ideal place to replenish your water supplies. 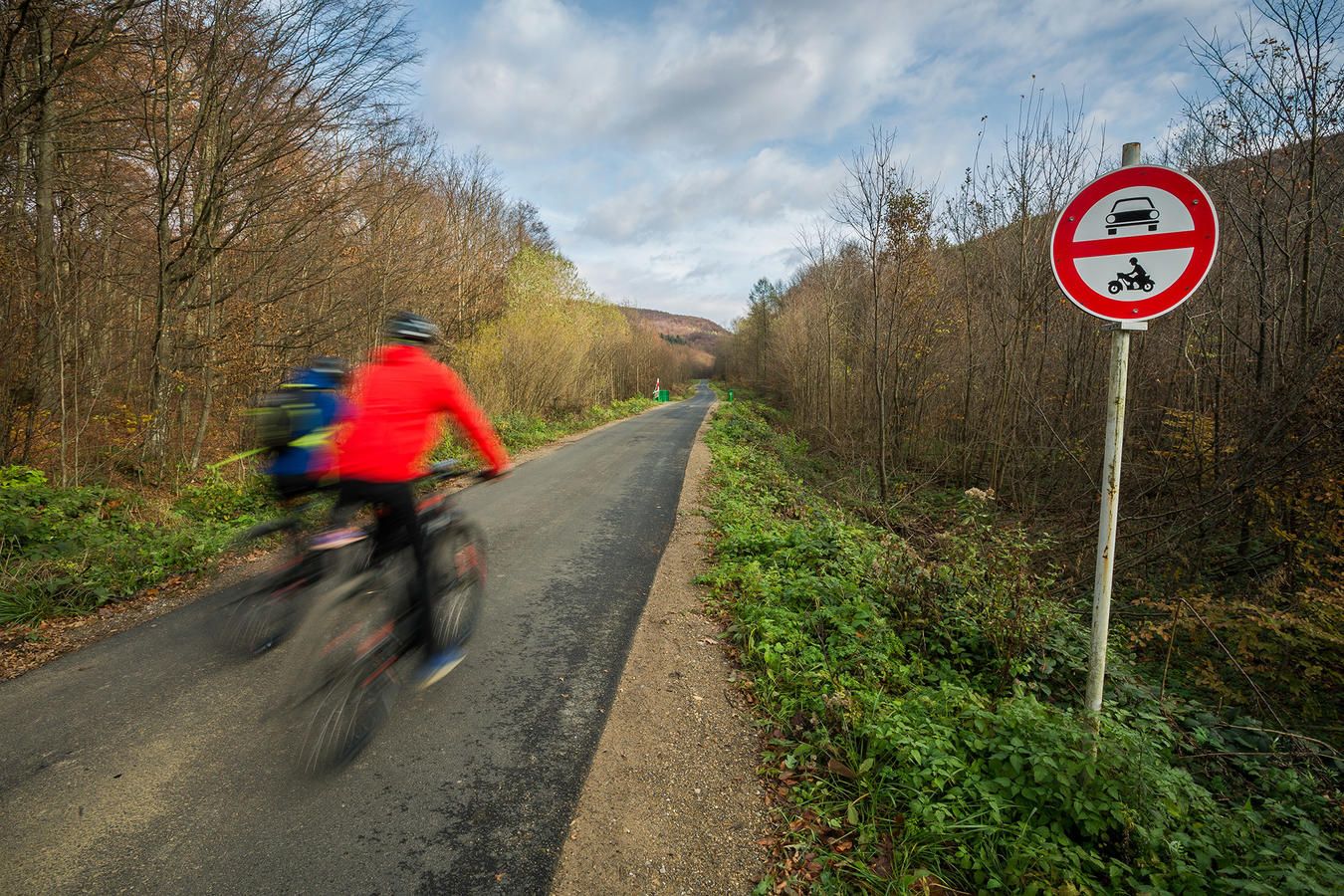